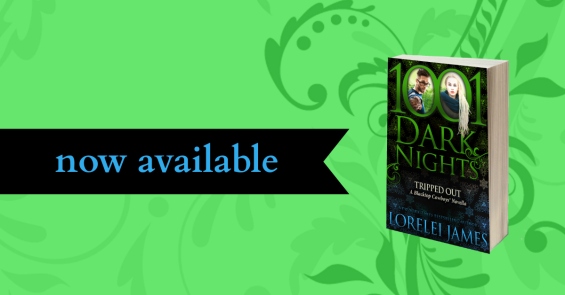 From New York Times and USA Today Bestselling author Lorelei James, comes TRIPPED OUT, a new novella in her Blacktop Cowboys Series, brought to you by 1,001 Dark Nights! Be sure to grab your copy today! 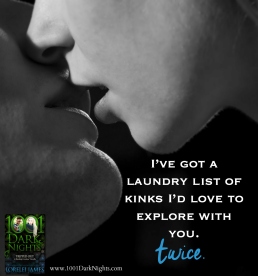 Stirling Gradsky abandoned the corporate rat race for a more laidback lifestyle. So it’s ironic she’s stuck working with a hard-bodied, know-it-all scientist who treats her like a stoner instead of a stone cold business woman capable of running a large scale cannabis operation. Dr. Hot and Tattooed with the big…brain needs to stop sampling their product; he’s under the half-baked idea that he’s the boss.

Dr. Liam Argent’s doctorate isn’t in chemistry, but from the moment he meets his sexy new coworker, there’s enough heat between them to short out all the lights in the grow house. First item on his agenda? Clearing up the sassy, blunt blonde’s hazy notion that she’s in charge.

Sparks fly as their attraction blazes. But can they weed out their differences without getting burned? 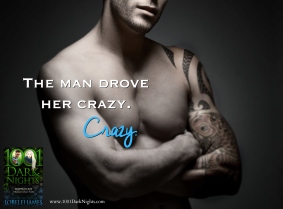 It was just her luck that she lost her balance as she slipped on her cowgirl boot, falling sideways into the coat tree, knocking it over with a spectacular crash.

So much for her stealth exit.

Liam raced around the corner. “Stirling? Are you…”

“Leaving? Yes. Get some rest, Dr. Argent. I’ll see you at work tomorrow.”

His eyes narrowed. “You’re pissed off at me.”

“What makes you think that?”

“You called me Dr. Argent.”

“It is your name, as you’ve repeatedly reminded me over the past ten months. Anyway, I’m not pissed off because you don’t want to discuss your past with me. It’s your choice. I’m not the type to nag or beg. But relationships require a level of trust from both parties, otherwise it’s superficial. I’ve had enough of that, so I’ll pass if that’s all you’re prepared to offer me.” She bent down to retrieve her boot….and found herself airborne with Liam’s shoulder in her stomach as he carried her in a fireman’s hold into the living room.

Stirling was so stunned by his caveman behavior she couldn’t speak.

Liam laid her on the couch and stretched out on top of her, preventing her escape.

The smart man had pinned her legs so she couldn’t knee him in the balls, either.

So she glared at him. She’d said her piece; in fact, she’d probably said far too much.

“Did you mean it?” he demanded.

“No. Did you mean it that we’re in a relationship?”

The vulnerability in his eyes just…slayed her. “The pranks, the bickering, the one-upmanship… We’ve been in a relationship since day one, Dr. Dumbass. An adversarial relationship, sort of fucked-up, to be honest. But in that time… Have I permeated your thoughts to the point you aren’t sure if you want to strangle me or if you want to f*ck me? Do you have entire conversations in your head about what clever remarks you’ll toss off the next time you run into me? Or maybe you plan to cross my path just so we can have a snarky back and forth? Does your heart race when you see me? Do you imagine shutting my smart mouth with a steamy kiss? Do you fantasize about storming into my office, locking the door, bending me over my desk, fucking me in silence until we both explode, and then leaving without saying a word?”

Ink Slinger PR provided me with an ARC for my honest review.  I’ll admit up front that I haven’t read any of the previous books in this series, but I don’t think that was necessary.  After reading the summaries on goodreads, it doesn’t seem that these characters were in other books.

Stirling Gradsky runs a company that makes marijuana products in Colorado, where it’s legal.  She is the brains behind the operations, and her brother Macon is the investor.  Macon hires Dr. Liam Argent, who is a scientist, to work in the lab, on things Stirling doesn’t know about.  This makes Stirling crazy. So what does she do? She pranks Liam, all the time.

I have to admit that the pranks were really funny.  The stuff they came up with made me laugh out loud a few times.  But for a novella, the romance in this book was so slow to develop.  There was also a lot of “science” in this book, and most of it I didn’t understand. I am not a pot smoker, and I don’t have a lot of friends who are, so in that regard, I couldn’t relate to the book.

I did, however, really like Liam.  He had a rough childhood, living only with his Gramma. He was very loyal to her, and really appreciated everything she provided for him. Stirling grew up in a traditional family, with two parents, and two siblings. But as soon as she could, she left, and her relationship with her family suffered.  She later regretted that, and her relationship with Liam helped.

Overall, this was a cute story, and I am interested in going to read the other books in the series. I would recommend.

Grab your copy of TRIPPED OUT today!